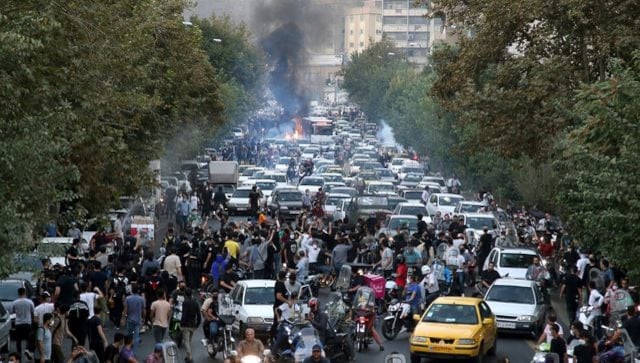 The protests in the Arab world, including Iraq, have drawn attention. Women are now gathering online to show solidarity with Iranian women who are suffering under Iran’s harsh theocratic regime

Iranian authorities have reacted to protests that erupted following the arrest of a 22-year-old woman by the morality police for wearing her hijab inappropriately. Street protests erupted after Mahsa Amini, who was apparently beaten for not wearing her hijab properly, was taken to jail.

Women have been protesting the laws that require them to wear hijabs and rioting across the country. The government is closing down the internet almost entirely, with seven people reported to have been killed.

However, protests in the Arab world (including in Iraq) have drawn attention. Women are now gathering online to show solidarity with Iranian women who are suffering under the harsh theocratic regime.

Iran is not the only country that enforces the hijab. They can be found in many different ways and in various degrees in many countries.

Contrary to Iran, Iraq does not allow for forced hijab wearing. The forced hijab is possible because of the contradictions and ambiguities in many parts of the constitution, especially Article 2 regarding Islam as the primary source of law.

In response to the UN security council’s economic sanctions, Saddam Hussein’s Faith Campaign was launched in the 1990s. Since then, women have been subject to increasing pressure to wear the hijab. The situation deteriorated after the US-led invasion. Many Islamist parties have close ties with Iran.

Contrary to George W. Bush’s 2004 claim that Iraqi citizens were “now learning about the blessings and freedom,” women have been suffering the oppression of patriarchy, perpetuated by Islamism and militarisation, and made worse by Iran’s influence.

After 2003, it was a struggle to go out in Baghdad without my hijab. To protect myself in conservative areas, I had to wear a headscarf during years of sectarian violence.

My memories of the pro-hijab banners and posters that were hanging around central Baghdad’s university have haunted my dreams ever since. Over the past two decades, the situation has not changed. The hijab was reportedly imposed on little girls and children in primary and secondary schools.

Social media has seen a new campaign to stop the forced wearing of hijab at public schools in Iraq. Natheer Isaa from the Women for Women group is leading the campaign. She told me that hijab was cherished by many tribal or conservative members of society, and that there are predictable backlash.

Due to threats and online attacks, similar campaigns were stopped. Women posting on social media with the campaign hashtag #notocompulsoryhijab have attracted reactionary tweets accusing them of being anti-Islam and anti-society.

Similar accusations are made against Iranian women who protest the regime and take off or burn their headscarves. Ayad Jamal Al-Dinn, a Shia Shia cleric from Iraq, lashed out at the protests via Twitter, calling the Iranian protestors “anti-hijab shares” who seek to destroy Islam, culture, and Islam.

My digital ethnographic work in Iraq on cyberfeminism and other countries has shown me many similar reactions to women who ask questions about the hijab or make the decision to take it off. Many women who reject the hijab on social media are subject to sexist abuses and threats. These attacks aim to silence and shame them.

The harshest reactions are received by those who openly discuss their decision to remove the hijab. It is considered a symbol of women’s honor and chastity. Therefore, removing the hijab can be seen as a rebellion.

The struggle of women with forced hijab, and the backlash against them, challenge the cultural narrative that hijab-wearing is a choice. Many women have the freedom to choose whether or not to wear it, but others must.

Academics must reexamine the debate around the hijab, and the conditions that make it compulsory to be worn. It is crucial to get rid of the false dichotomies between culture and religion or local versus western that obscure rather than illuminate the root causes behind a forced hijab.

Nadje Al-Ali, a feminist academic who studies gender-based violence in Middle East contexts, emphasizes the need for us to move beyond these binary structures and recognize the complex power dynamics that are involved.

Any discussion on women’s rights should include the issue of women being forced to wear hijabs in conservative societies.

Iranian women are protesting the compulsory hijab, despite security measures. This is part of a wider struggle for women against conservative autocratic regimes and societies that deny women agency. We should all protest the mandatory hijab and those who impose it or continue to allow it to be imposed on women in Iran and Iraq.

One Iraqi woman activist said to me that the hijab was like a prison gate for many of us and that we are the invisible prisoners. It is crucial for international media and activists not to accept the notion of Muslim women needing to be saved by the international community.

This article was republished by The Conversation and is licensed under a Creative Commons license. You can read the original article.