What is the Right Word? Bharatiya Tradition of “Vaad” may aid in uplifting our public discourse which has reached an all-time low. 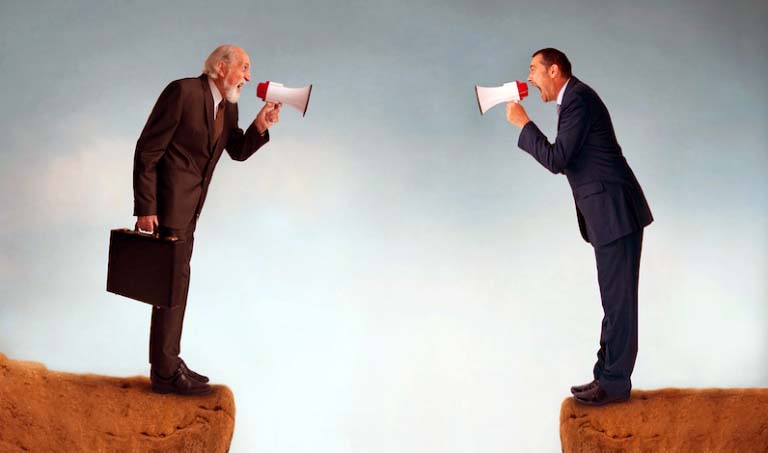 The main cause of the issue is the fact that we adopted the Western debate framework under European influence for around 200 years, and then left our own custom of ‘Vaad’, which we have been able to inherit from the beginning of our civilization.

The public discourse in our current Bharat has reached an all-time low. It’s not just about mud-slinging on social media and debates on news channels and public speeches/comments by journalists or press conferences held by different party leaders, the amount of bitterness, anger, and savagery is unheard of. What we endure each day is violence in the form of words. The majority the public intellectuals as well as those who are referred to as “influencers” tend to fuel the flame.

Bharatiya against European Framework of ‘Debate’

The main reason for the issue is the fact that we adopted the Western model of debate under European influence about 200 years ago and have departed from our own traditions that we call ‘ Vaad‘ that we have carried on from the beginning of our civilization. There is a significant distinction between the Western structure and Bharatiya culture in this respect. The Western model of public discourse holds that the goal of an argument is to be able to win an argument by outwitting opponents with argumentation that is aggressive and combative. In contrast, the Bharatiya practice in Vaad is a firm believer that the purpose of a debate should not be about winning the argument, but getting closer to the truth.

That is why unlike the unilinear approach of the West ‘Vaad‘ has a multi-dimensional approach with two key facets: Samvada (correspondence/communication) and Vivada (disagreements).

Wilhelm Halbfass aptly explained the motive behind the contorted model of debate, and the Indian dilemma that is in India in his book, India and Europe The Essay on understanding. Halbfass stated, “Modern Indian thought finds itself within the historical context that was invented by Europe and struggles to communicate. In its self-representation as well as self-assertion, it is speaking to the majority of European languages. However, this does not suggest that the conversation between India and Europe has been replaced by Europe. The strength to represent the Indian tradition is not over its self-representation and auto-interpretation of Modern India. The dialogue is in flux.”

Halbfass (1940-2000) served as a professor in the department of Indian Philosophy at the University of Pennsylvania. His work, which is mentioned above first appeared in 1988. Since then, the dialogue window has become more narrow, and, since the advent of West-controlled social media platforms and the European language has become more dominant. This can be seen in the proliferation of buzzwords that influence public debates, including trending, trolling, or ‘viral’ tweets and posts as well as the frequent use and misuse of negative terms in our public spaces. It wasn’t the norm in our Bharatiya custom in discussions or debates.

Radha Vallabh Tripathi clarifies it clearly In the Vada (Vaad) within Theory and Practice, “There is a well-known saying in the world of Sanskrit Panditsthat says “Vaade, Vaade Jayate Tattvabodhah'(after going through the sequence of Vaadas, true knowledge is acquired). It is this notion of Tattvabodhathat reaches the essence and absolute truth which distinguishes this Indian tradition of the ‘ Vaada’ from Western dialecticism. Greek philosophers such as Aristotle have introduced the concept of dialectics mostly in the sense of “the art of discussion, debate or controversy, a form of argument or dispute or the process of discourse (or conversational) thinking.”

S Radhakrishnan, former president of Bharat and prominent scholar of Bharatiya tradition stated in Indian Philosophy (Vol. 2,), “Helped by natural conditions and equipped with the ability to consider the implications of the world and their implications, the Indians avoided the fate that Plato declared to be the most dreadful of all, namely. the hate to reason.”

The ancient Bharatiya texts, such as Panishads Mahabharata, Suutanipata (an old Buddhist text) Yajnavalkyasmriti, and Arthashastraetc discuss extensively not using harsh language in an argument.

Bhishma defines the requirement of using non-sharp language when conducting discussions. In the Mahabharata making use of harsh terms or abusive language could be linked to assaulting a person.

Gautam Buddha has clearly stated that one who fights with others over his personal views because of the result of prejudice, is unable to be brought to the point of a sense.

According to Tripathi “The Law books of Manu Yajnavalkya and Manu Narada along with others identify ” Vaak-Parusya’ (harshness of speech) as one of the sins and provide punishments for it. The idea of Vaak-Parusyainvolves shouting at people, calling names, and throwing at people… Kautilya defines the following types of Vaak-Parusya -attributing physical insufficiency (calling someone deaf, blind, and so on. ) and the use of dirty words and condemnation.”

There are two epic stories in the world of literature. Ramayana The Ramayana and Mahabharata each have several interesting and heated discussions, however, instead of engaging in violence, participants adhered to certain rules of discussion. It would do our politicians, TV anchors, public intellectuals, and social media influencers a lot of good and help to bring up the level of public discourse if they can go back to Mahabharata (Shantiparva) and read the debate between philosopher king Janaka and a single woman Sulabha who is an intellectual-renunciant.

Sulabha provides a great method for conducting an argument as she lists 18 negative aspects of speech that make the speech less wise. Nine of them relate to the style and structure of the conversation and nine of them are connected to the intention of the speaker.

Nine flaws in expression relating to structure and style

Nine flaws in the expression relating to the purpose

According to the Mahabharata, these are the virtues that the speech imbibes when free from these blemishes: Anapetarthata (wholeness), Abhinnarthata (coherence), Nyayarthata (judiciousness), Anyunadhiky (conciseness), Slaksanata (grace) and Asandigdhata (being free from doubt).

Discourse that is balanced

It is stated in the Mahabharata, “A discussion is illuminated when listener, speaker, and statement are in sync. Communication is not established when the speaker ignores the listener’s concerns and only encourages self-interest. However, when a speaker gives away personal issues and instead promotes the concerns of another speaker, his/her speech is questioned and his statement is deemed to be deficient. True speakers take into consideration the views of the audience and make their own arguments in a way that is balanced.”

As I mentioned earlier that it would improve the quality of public debate in Bharat best to take lessons from the rich tradition of dialogues, debates, and discussions that took place in our intellectual debates of the past. This will help us all get closer to the truth, making these discussions worthwhile. Alternatively, we will allow the public debate to be controlled by cacophony.

Share
Facebook
Twitter
Previous articleReview of The Midnight Club: Mike Flanagan’s latest book is full of bright ideas
Next articleKamal Haasan, who thinks that the Chola King was not Hindu was himself victimized by religious scanning at one time